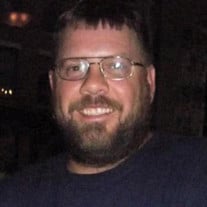 Charles W. Dupree, 52, of Galena Illinois passed away on January 21st after a valiant battle with cholangiocarcinoma cancer. He passed in his home surrounded by his loving family. Charlie was born on August 22nd, 1969 to Betty and Marvin Dupree in Chicago, Illinois. He attended both Jahn Elementary School and Carl Schurz High School before moving on to marry the love of his life, Jennifer Dupree, in Chicago, June 30th. 1995. Charlie and Jennifer had 3 children, Joshua, Dylan and Kayla and they were the center of his life. He moved with Jennifer and the kids to Galena, Illinois in 2003 where they made their home. There wasn't much Charlie couldn't do and he held several jobs over the years; including working for the Illinois Tollway where he drove a snow plow and maintained the tollway. It was after moving to Galena that Charlie began his 10 year career with the Canadian National Railroad where he made many friends that helped make up for the time he had to spend away from his family. But the best thing about working for the CN was that since he was on the rail gang he often ended up working in the Tennessee area near where is Mom and several of his siblings lived. Charlie dearly loved his Tennessee family and enjoyed getting to have this time with them. He was able to do lots of fishing with his Mom, his fishing partner; hanging out with his sisters and brothers and just being with the nieces and nephews. This was the only time he could be content while having to be away from home. Sitting still or being idle was not for Charlie! He was a man on the move and always kept busy if possible with lots of interests and hobbies. If he wasn't fishing, he was getting ready to go fishing; or possibly cooking, gardening or working in his yard. Another love for Charlie was the Cubs. There's no bigger Cubs fan and there was no one anywhere who was more excited when they won the World Series. Finally!! Charlie loved music of ALL kinds and he really loved to sing, even songs from kids movies. All his friends and family can tell you about his singing. Charlie never met a stranger and he had the biggest heart in the world. There was never a more positive person and he always put his family first. He would tell you that they were his everything. He always had a sense and humor and to know him was to love him. He will be dearly missed by all who knew and loved him. Charlie is survived by his beloved wife Jennifer Dupree, his children, Joshua, Dylan and Kayla from Galena, Illinois; and his daughter Kristen and granddaughter Joslyn from Carol Stream, Illinois. He also leaves behind his dear Mom, Betty Dupree and siblings, Patricia, Elizabeth, Thomas, Bobby Ray and James and many nieces and nephews and a big host of extended family and friends. Charlie is preceded in death by his father, Marvin Dupree, Stepfather, Ray Mathis, brother Clarence (Punk) Dupree and nephew Peter (Monk) Halan

Charles W. Dupree, 52, of Galena Illinois passed away on January 21st after a valiant battle with cholangiocarcinoma cancer. He passed in his home surrounded by his loving family. Charlie was born on August 22nd, 1969 to Betty and Marvin Dupree... View Obituary & Service Information

The family of Charles W Dupree created this Life Tributes page to make it easy to share your memories.

Charles W. Dupree, 52, of Galena Illinois passed away on January...

Send flowers to the Dupree family.