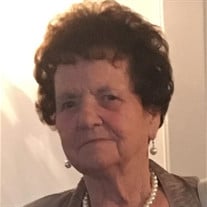 Józefa Głowa was born on November 16th, 1935 in Poland to proud parents Antonina and Wawrzyniec Potaczek. She was one of six children and grew up close with her 2 brothers and 3 sisters (Zofia, Sr. Marysia, Franciszka, Józef, and Jan). She met her husband Władysław Głowa in Poland. They were married in 1957 in the presence of their family and friends. In 1958, they welcomed their first born, Józef. Four years later, their first daughter, Marysia, was born. In 1966, they welcomed their second daughter, Zofia, into the family. In 1982, Józefa emigrated to America. Two years later, her husband, Władysław, joined her, followed by their youngest daughter, Zofia, in 1986. Władysław and Józefa were happily married for 35 years before Władysław’s passing in 1991. Józefa was more than just a loving and caring mother to her children, Józef (Stanisława) Głowa, Marysia (Antoni) Porebski, and Zofia (Jan) Czekaj. She was an amazing grandmother to 9 grandchildren: Marcin Głowa, Marzena (Adam) Kotyza, Jola (Piotr) Nowak, Bogdan Porebski, Artur (Iwona) Porebski, Damian (Klaudia) Porebski, Adam Czekaj, Chris (Kasia) Czekaj, Anna (Brandon) Ibanez. Józefa was also blessed with 7 great-grandchildren (Julia, Jakub, Marcel, Marlena, Julita, Helena, Cornelia) and has her 8th grandchild due in April. Józefa enjoyed spending time with her family. She found great joy in attending family events and get togethers. When the weather was nice, she would be found outside. Prior to her retirement, she worked various jobs and met various people that she kept in contact with throughout the years. Józefa was a woman of strong faith. Every Sunday you would find her at St. Constance church for morning mass. She was also a consistent attendee for Rosary mass and other various church events and festivals. Józefa was diagnosed with cancer and fought the horrible disease for over 3 years. Her health took a turn for the worst at the end of 2021. In the early morning of January 30th, after a courageous and long battle with her illness, God called her home. Józefa is survived by her children, her 9 grandchildren, as well as a large loving extended family. She will be reunited with and buried beside her late husband in Niedźwiedź, Poland. She will be deeply missed by many.

Józefa G&#322;owa was born on November 16th, 1935 in Poland to proud parents Antonina and Wawrzyniec Potaczek. She was one of six children and grew up close with her 2 brothers and 3 sisters (Zofia, Sr. Marysia, Franciszka, Józef, and Jan). She... View Obituary & Service Information

The family of Jozefa Glowa created this Life Tributes page to make it easy to share your memories.

Send flowers to the Glowa family.